Skill trees most commonly seen in strategy and RPGs, may be the cheat code for members to understand. where they are, set goals, and keep from stagnation. Applicant Skill Forest RIP DAO
Relevent Link: github.com/raid-guild/RIPs/blob/master/PROPOSALS/rip-24-skill-forest.md
Applicant: 0xdf44f2295d9c40f3dc7f738dee2a099cb1f06b1d
Shares: 0
Loot: 0
Tribute Offered: 0
Payment Requested: 4000

After a few sessions of brainstorm, ideation, and identifying problems, we’ve been trying to settle on path for recognizing skills that is fair, reputable, viable, and useful. TL;DR at the end.

At the risk of oversimplifying: fair means that everyone is subject to the same rules for evaluation; reputable means a “skill badge” can’t be given away too easily; viable means we don’t try to certify every skill under the sun; and useful means the Guild should be able to extract value from the process.

Two of these points—reputable and useful—were highlighted in a recent discord poll:


During a sprint exercise for the RIP, @plor pointed out that trying to list/define the “important skills” under our role umbrellas is a moot point, especially for a v1 of a skill badge system. A previous poll and the boards of the exercise seem to support his point.

Board for Wizard skills: 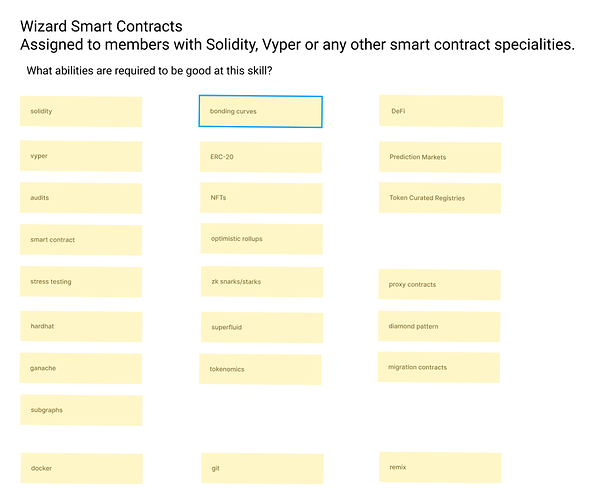 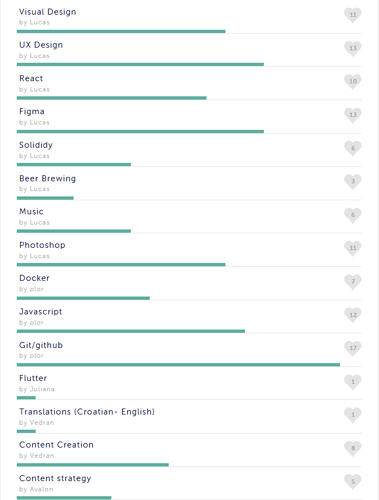 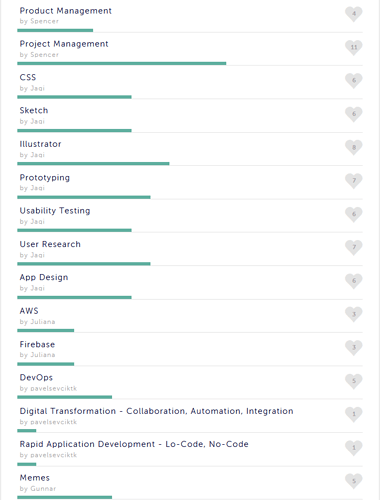 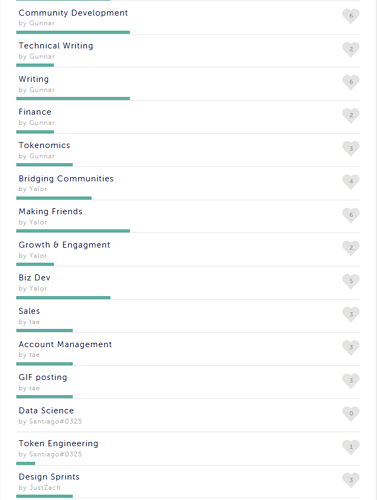 @DarrenM’s suggestion in the polls seems to be the most sensible answer: instead of trying to list or define skills, represent the overall knowledge in a field via ranks (eg. “junior”).

This structure has the added benefit that ranks such as “apprentice” can function better as a learning path than having X badges in a skill.

However, during other exercises the most frequent problem was bootstrapping credibility. If proficiency has to be recognized by peers, how do we get the first proficient members there? In this proposal, I say we take (a series of) votes.


Proposal for identifying and certifying proficiency as a collective: 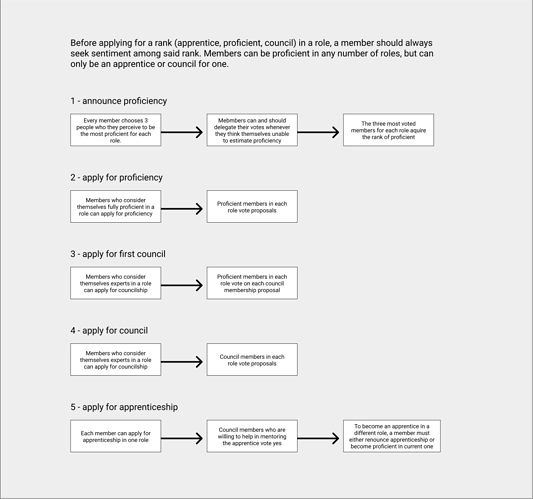 Each member chooses 3 other members as “the most proficient” for each role (eg: Wizard). These members should be chosen for best representing Raid Guild’s talent, and their proficiency in their field should be unquestionable.

Through delegation, members can give their voting power on a role to members they trust (abstaining is another option) for roles they are not knowledgeable in or when they don’t know the candidates’ proficiency and expertise.

2: Members of a rank approve others into rank

From this setup, we can follow a fairly straightforward system of petitioning for three ranks: apprentice, proficient, and council.

Apprenticeship is a way to signal a role you’re actively learning to get mentorship, aiding people with less experience achieve proficiency. A mentorship by approved council members can be better relied upon to guide new raiders, possibly distributing mentor responsibilities among more than one council member. It also creates accountability from the pupil. If you want to be an apprentice, you have to work/learn in order to maintain that status and receive mentoship.

After the initial proficiency identification, when someone applies for proficiency it is voted upon by all proficient raiders in that role. As with other proposals and petitions in the Guild, it is always recommended to gather sentiment, approval and feedback before submitting something to a vote.

Unlike the initial proficiency bootstrap, members have to volunteer to be in the council.

I argue that this system meets all four initial goals. It is fair in the sense that members do not get a “higher rank” simply for being in the Guild for a longer time. And besides the initial vote for proficiency and councilship (which everyone votes on), from then on it will be a group of peers deciding on eligibility.

It also is as reputable as the DAO itself. It certifies the skill of raiders not according to Adobe or Apple’s standards, but to the Guild’s own standards, reputation, and values.

It is a much more viable path than trying to define “what skills are required to be a level 4 designer”. Even if many roles have to be voted upon, the responsibility of voting is fragmented across roles. By encouraging members to seek consensus, approval, and feedback before applying for a rank, we also attenuate burocracy in certification.

Lastly, I believe it is useful. By having one or more counselor in each role (first approved by their peers), RaidGuild will have clear points of reference in every field, by their own volition.

With use and in future iterations, we can begin to identify what exactly constitutes “proficiency” in each of our areas of expertise, fragmenting into levels and requirements as needed by each role. We can also help identify the best way to learn the ropes of a skill by observing our apprentices, developing learning paths and levels of apprenticeship to many skills.

The last image above (from the figma https://www.figma.com/file/GyraEdhZO4u3YFw2leK0u2/Skill-Forest-RIP?node-id=61%3A79) summarizes the proposed process. My main concerns were avoiding a scope too large, becoming unviable, or taking on responsibilies beyond the scope of this particular RIP (such as defining skillsets for every role).

I look forward to feedback on what could improve and criticism on what might not work (fork it). Thanks for reading, and please put your thoughts in the thread

Getting down the things we talked through at the meeting yesterday and solidify the ideas I dropped into the discord.

To scale the certification process without burdening our council members we could distribute this to an algorithm that can be curated by the members. We can also retain veto power for projects that don’t meet the burden of earning skills as outlined by the proposing party to minimize the governance required.

To standardize the process this can be tied into the Raid & RIP process where similar to shares you can only earn them from (approved) Raid & RIP projects. Members are effectively giving other members in their raid party skills ‘certificates’ for that specific project.

Clerics, monks, and the raid party submit a raid’s skills assessment along with the completed or executed proposal to the DAO (or skill council).

The onus is on the raid party to enable accountability by submitting accurate and worthwhile skills & sub-skills for each member. Prior to a raid being established a draft raid can be created with Personas and skills that the Cleric/Monk is still looking to fill.

The final persona to guild member should be 1:1 upon submission. In many cases raiders will fill multiple ‘roles’ on a raid but want to be diligent about how many skills can be issued.

This assessment can remain internal but for some close partners we could allow them to be involved in the assessment of team members which they had direct interaction or feedback for.

Upon acceptance the project is issued a (TBD) number of points (tokens, potentially) that can be given to the different skills being earned through the project. These points would be determined by the DAO, ideally on a fixed-ish $/points ratio to give a simile of value. This would not vary by raid/RIP and would be based on the total budget before spoils to the DAO.

Voting here is TBD, but could be quadratic or a simple average by each raid party member. In aggregate the total amount of points for the raid can be awarded to any of the skills laid out in the approved assessment for the party members. The points do not have to be awarded and are not awarded by default.

The project has been completed and client is happy. Upon the release of the escrow, skills would be issued by the minion (or the determined process).

After distribution begins we can start with simple models and displays for this data and get more comprehensive as the methodology improves and scales.

An internal comprehensive ‘player card book’ could show off the raids + skills earned by players initially sortable and filterable similar to tags. Similarly to the external portfolio the guild would have a diligent analysis of skills and requirements for projects and their values. Clerics and monks could search for relevant raiders via the tags/skills.

With sufficient distribution we can begin to weight skills received based on the grantor and their received skill weights. Then discreet ‘ranks’ can be set based on the aggregate skill distribution. This would power a second iteration of the above cards that is able to suggest raiders for personas when clerics are looking to fill roles based on difficulty of the requirements.

We could definitely team up with great partners like SourceCred to enable this with the data we’re able to assemble here.

One consideration is this leaves open for how we might handle projects outside the guild where we can ascertain someone’s potential skills even though they haven’t partaken in raids with the guild explicitly.

Once ranks are possible then we can give some lighter weight to projects outside the guild to meet pre-requisites for raids, etc. The guild would want to be careful with certificates outside their completed projects to keep from signing off on projects we didn’t have direct involvement in.

Hey folks, I’m loving the thinking going on so far and I’m throwing in some related prior art:

https://progressionapp.com/ and their related resources (https://www.progression.fyi/, the podcast, etc) have some good inspiration for handling “skill trees” in a career context.

Progression.FYI has a great collection of companies that have put though into their career ladders, and there are examples of people trying to work out the complexity of breaking apart skills into subskills.