All, the #membership-proposals/ibejd 0372 thread had a lot of activity but I feel this one deserves it’s own thread for public benefit. A bit of background first.

I first met Jeremy Drane a few months ago over Discord as part of larger conversations regarding the Rebirth SAFT deal that Wagner was selling as a pre-sale. I don’t remember who or how I was introduced, but I managed to meet JD face to face in Miami during the Bitcoin Conference. He passed on the SAFT but did purchase a T3 poster set. We’ve kept in touch since then and he’s consistently expressed his desire to get involved in the dao. He’s a successful entrepreneur and has a large network of high net-worth individuals and has made several referrals who have joined for upwards of five figures. In addition to that, he connected us with Validation.Capital, who I met with yesterday and gave us some valuable feedback based on another NFT dao raise that they participated.

JD’s feedback and guidance the last few weeks have been crucial as a mentor as well.

When we discussed formalizing his involvement in the dao he basically gave me his wallet address and said “take your pick”. We had been discussing a more limited proposal but after discussion I agreed that I would propose the wholesale asset transfer for dao issuance at the GAO week one rate of 800 LOOT and 200 SHARE per 1000 USDC.

The wallet in question (4xjcQWbuHFaZDwWiHQXSBShYYgYptuxHAYNgLByh28Hn) contains a partial set of T3 rebirth posters and associated loot. For any wondering, the T0-2 posters remain on ETH mainnet and the associated loot drop won’t be distributed until it is; regardless, it it not part of this deal.

There were some concerns on both sides of the trade that we tried to address. Some dao members had concerns about the liquidity of certain assets, while on the other hand JD was concerned to be taking nearly a 50% cut on the issuance. I worked with several members and we worked out a valuation model that we should be able to use moving forward.

For assets without recent sales, we’ve simply taken the average of the sales that we have in our market history feed, and averaged them together with the highest bid and lowest ask on the dex at the time. It’s not scientific, but we figured it was the best risk-adjusted valuation we could come up with. To that end we came up with a value of $93,823.34974 for the following assets, which works out to 75059 LOOT and 18764 SHARES. 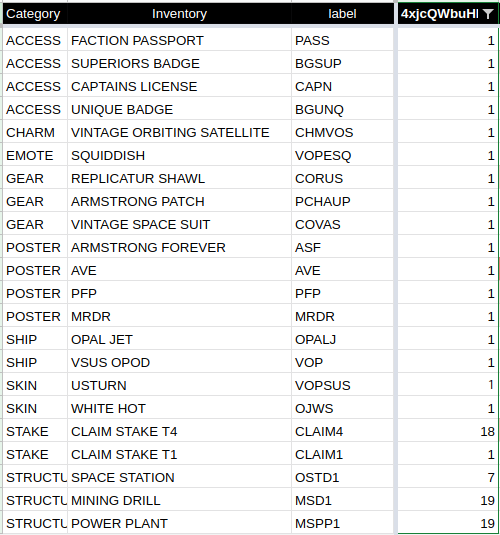 Once we have a majority aye vote locked or a successful proposal I can start making arrangements to take custody of the private key. For discussion of how said assets will be incorporated into the existing wallet scheme or liquidated for cash, as well as valuation of particular assets, please see the Discord.